The cause of HCS is the increase of friction as a result of the discordance between the spherical hip (femur) head and its receiving socket (acetabulum) forming the hip joint. Normally the head of the femur easily slides in any direction in the socket. Some discordance in this ball-socket mechanism may impair the fluency of the movement. Hip Compression Syndrome (HCS: Femoroacetabular Impingement: FAI) is often manifested around the hip by; pain, stuck and sometimes sharp stinging pain (especially during hip rotation and squatting).

Although the exact cause is not exactly known, developmental slight irregularities on the joint faces may increase due to excessive compulsive activities in athletes, also this condition is thought to arise with the development of hip joint in childhood. Femoroacetabular impingement syndrome (FAI) is associated with cartilage damage, labrum tears, early hip arthritis and low back pain, and is more common in senior athletes and in people who live an active life. Hip compression is theoretically one of the causes of hip arthritis and is one of the causes of early hip arthritis (osteoarthritis).

There are three types of CSR!

There are three possible problems that cause hip compression:

– Pincer Type: If the anterior edge of the acetabulum is longer than it should be, the neck of the femur may bump and jam in here when the hip is bent. It is more common in middle-aged women.

-Cam Type: Normally the sphere-like shape of the femoral head, if it is not smooth; so, it has abnormal protrusions, the head is trapped on the edge of socket in hip bending movements such as tying shoes or pedalling. It is more common in young men.

-Mix Type: There may be problems in both pelvis and thigh. In many cases, these two forms occur together.

There are other problems that can cause hip compression. In Legg-Calve-Perthes disease, the femoral head is not sufficiently fed due to circulatory problems and bone tissue dies. Bone deformity occurs. The epiphyseal shift of the femoral head is a condition characterized by the separation of the femoral head from the growth cartilage during adolescence. “Coxa vara is characterized by decreased femoral neck angle as a result of working at different rates of femur cartilage growing is another cause of hip compression syndrome.

What are the Hip Compression Findings?

In particular, the anterior upper portion of the acetabulum is compressed by bending the hip forward and turning it inward (kneeling or crossing the legs). Over time, the cartilage structure and the labrum tissue of the hip joint are damaged. Symptoms of hip compression patients may complain of increasing pain in the anterior aspect of the hip over time with an insidious onset and associated with overuse or may consult with acute pain due to labrum tears. Pain is felt in the anterior aspect of the hip and pubic region. They may feel pain and stuck in front of the hips while, sitting and standing up, kneeling or crossing their legs.

How Is Hip Compression Treated?

The first step in the treatment of people with hip compression syndrome is to reduce pain-causing activities at rest. Then, exercises and physical therapy methods (muscle strengthening, warm application etc.) are applied to stretch and strengthen the muscles around the hips. Pain medications can be used in the painful period. Nonetheless, after these precautions in the patients whose pain does not disappear, surgical treatment is required.

Surgical intervention is beneficial in order to reduce pain and gain activities in the short term and to stop the arthritis process in the long term. Anatomical differences can be treated by arthroscopic or open methods.

Arthroscopically, the hip joint is examined and the bone protrusions that cause friction are shaved; if there is a erosion, interventions are applied according to that. Recently mini open techniques have gained popularity as well. In this way, it is possible to achieve recovery in a shorter time and not to disarray the hip blood supply. 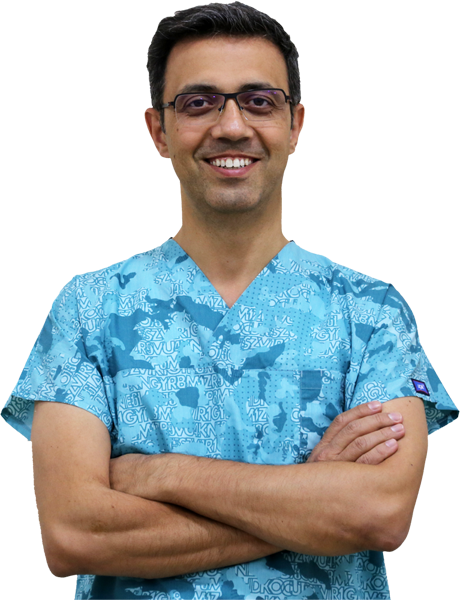